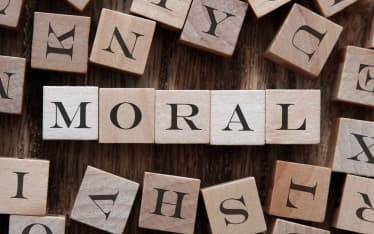 Chapter I: Moral rights Article L121-1
The author enjoys the right to respect for his name, his quality and his work.
This right is attached to his person.
It is perpetual, inalienable and imprescriptible.
It is transmissible by death to the heirs of the author.
The exercise may be conferred on a third party by virtue of testamentary provisions.

The author alone has the right to disclose his work. Subject to the provisions of Article L. 132-24, it determines the disclosure process and sets the conditions thereof.
After his death, the right of disclosure of his posthumous works is exercised for their lifetime by the executor (s) designated by the author. In their absence, or after their death, and unless the author wishes otherwise, this right is exercised in the following order: by the descendants, by the spouse against whom there is no final judgment legal separation or who has not contracted a new marriage, by heirs other than descendants who collect all or part of the succession and by universal legatees or donees of the universality of future goods. This right can be exercised even after the expiration of the exclusive exploitation right determined in article L. 123-1.

In the event of a notorious abuse in the use or non-use of the right of disclosure on the part of the representatives of the deceased author referred to in Article L. 121-2, the tribunal de grande instance may order any appropriate measure. . The same applies if there is a conflict between the said representatives, if there is no known beneficiary or in the event of vacancy or withdrawal. The court may be referred in particular by the minister responsible for culture.

The audiovisual work is deemed to be completed when the final version has been established by mutual agreement between, on the one hand, the director or, possibly, the co-authors and, on the other hand, the producer. It is forbidden to destroy the matrix of this version. Any modification of this version by addition, deletion or change of any element requires the agreement of the persons mentioned in the first paragraph. Any transfer of the audiovisual work to another type of medium with a view to another mode of exploitation must be preceded by consultation with the director. The authors’ own rights, as defined in article L. 121-1, can only be exercised by them on the completed audiovisual work.

(Law nº 94-361 of May 10, 1994 art. 3 Official Journal of May 11, 1994)
Unless there is a stipulation to the contrary more favorable to the author of the software, the latter may not:
1 ° Oppose the modification of the software by the assignee of the rights mentioned in 2 ° of article L. 122-6, when is not prejudicial to his honor or reputation;
2 ° Exercise the right to repent or withdraw.

The right of disclosure recognized to the agent mentioned in the third paragraph of Article L. 111-1, who has created a work of the mind in the exercise of his functions or according to the instructions received, is exercised. in compliance with the rules to which he is subject in his capacity as agent and those which govern the organization, functioning and activity of the public person who employs him.

1 ° Oppose the modification of the work decided in the interest of the service by the authority vested with hierarchical power, when this modification does not harm their honor or reputation;

2 ° Exercise the right to repent and withdraw, except with the consent of the authority vested with hierarchical power.

The author alone has the right to collect his articles and speeches in a collection and to publish them or authorize their publication in this form. For all works published in this way in a journal or periodical collection, the author retains, unless otherwise stipulated, the right to have them reproduced and to use them, in any form whatsoever, provided that this reproduction or this exploitation is not likely to compete with this journal or this periodical collection.

Under all matrimonial regimes and under penalty of nullity of all contrary clauses in the marriage contract, the right to disclose the work, to set the conditions for its exploitation and to defend its integrity remains specific to the author spouse. or to the spouse to whom such rights have been transferred. This right cannot be brought in as a dowry, nor acquired by the community or by a partnership of acquests. The pecuniary products resulting from the exploitation of a work of the spirit or from the total or partial transfer of the right of exploitation are subjected to the common law of the matrimonial regimes, only when they were acquired during the marriage; the same is true of the savings made by these leaders. The provisions provided for in the preceding paragraph do not apply when the marriage was celebrated before March 12, 1958. The legislative provisions relating to the contribution of the spouses to household expenses are applicable to the pecuniary products referred to in the second paragraph of this article