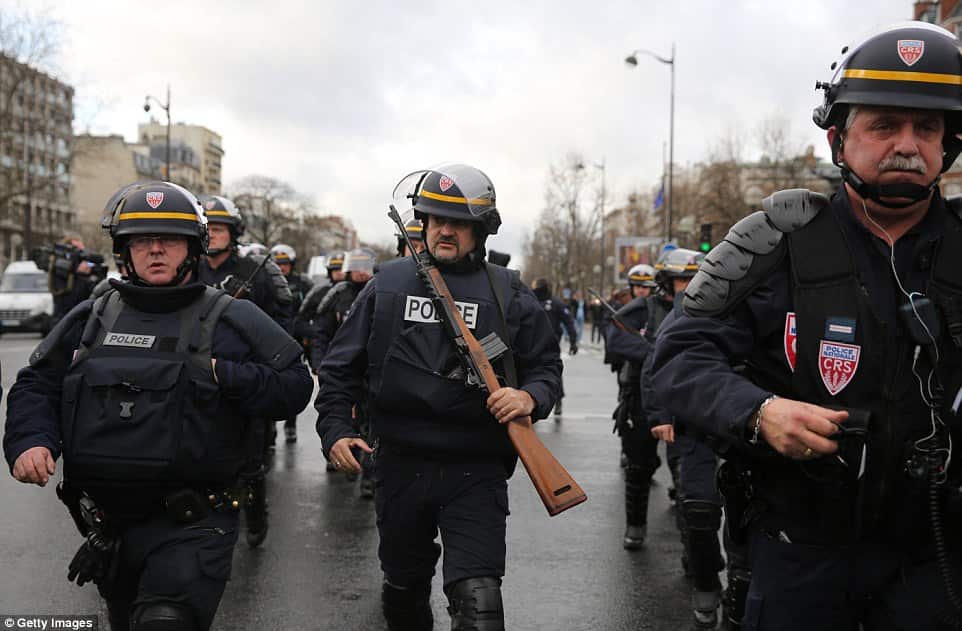 Law Of 3 April 1955 Establishing A State Of Emergency

Law establishing a state of emergency and declaring its application in Algeria.

The National Assembly and the Council of the Republic have deliberated,

The President of the Republic promulgates the law, the content of which follows:

A state of emergency can be declared on all or part of the metropolitan territory, of Algeria, or of the overseas departments, either in the event of imminent danger resulting from serious breaches of public order, or by case of events presenting, by their nature and gravity, the character of public calamity.

The state of emergency is declared by decree in the Council of Ministers. This decree determines the territorial constituency (s) within which it comes into force.

Within the limits of these constituencies, the zones where the state of emergency will be applied will be fixed by decree.

The extension of the state of emergency beyond twelve days can only be authorized by law.

The law authorizing the extension beyond twelve days of the state of emergency sets its final duration.

The law extending the state of emergency lapses at the end of a period of fifteen clear days following the date of the resignation of the Government or of the dissolution of the National Assembly.

The declaration of a state of emergency gives power to the prefect whose department is located wholly or partly in a constituency provided for in article 2:

1 ° To prohibit the movement of people or vehicles in the places and at the times fixed by decree;

2 ° To establish, by decree, protection or security zones where the stay of people is regulated;

3 ° To prohibit the stay in all or part of the department to any person seeking to hinder, in any way whatsoever, the action of the public authorities.

The Minister of the Interior in all cases and, in Algeria, the Governor General may pronounce the order of residence in a territorial constituency or a specific locality of any person residing in the zone fixed by the decree referred to in article 2. whose activity turns out to be dangerous for the security and public order of the territorial districts referred to in said article.

In any case, house arrest may have the effect of creating camps where the persons referred to in the previous paragraph would be detained.

The administrative authority will have to take all necessary measures to ensure the subsistence of persons required to live in residence as well as that of their families.

Any person who has been the subject of one of the measures taken in application of article 5 (3 °), or of article 6, may request the withdrawal of this measure. Its request is submitted to a consultative commission comprising delegates of the General Council appointed by the latter and comprising, in Algeria, the joint representation of elected representatives of the two colleges.

The composition, the method of appointment and the operating conditions of the commission will be fixed by a decree in the Council of State.

The same persons may appeal for excess of power against the decision referred to in paragraph 1 above before the competent administrative court. The latter must rule within one month of the appeal. In the event of an appeal, the decision of the Council of State must intervene within three months of the appeal.

If the above courts fail to rule within the time limits set by the previous paragraph, the measures taken in application of article 5 (3 °) or article 6 will cease to be executed.

The Minister of the Interior, for the whole of the territory where the state of emergency is instituted, the general government for Algeria and the prefect, in the department, can order the temporary closure of theaters, drinks and meeting places of all kinds in the areas determined by the decree provided for in article 2.

May also be prohibited, in general or in particular, meetings likely to cause or maintain disorder.

The authorities designated in article 6 may order the surrender of the weapons of the first, fourth and fifth categories defined by the decree of April 18, 1939.

The weapons of the fifth category handed over by virtue of the preceding provisions will give rise to a receipt. All arrangements will be made for them to be returned to their owner in the state they were in when they were deposited.

The declaration of a state of emergency is in addition to the cases referred to in the decree article 1 of the law of 11 July 1938 on the general organization of the nation in time of war for the implementation of all or part of the provisions of the said law with a view to meeting the needs resulting from the circumstances provided for in Article 1.

The decree declaring or the law extending the state of emergency may, by an express provision:

1 ° confer on the administrative authorities referred to in article 8 the power to order house searches day and night;

2 ° To empower the same authorities to take all measures to ensure the control of the press and publications of all kinds as well as that of radio broadcasts, cine-matographic projections and theatrical performances.

The provisions of paragraph 1 of this article are applicable only in the areas fixed by the decree provided for in article 2 above.

When the state of emergency is instituted, in all or part of a department, a decree taken on the report of the Keeper of the Seals, Minister of Justice, and of the Minister of National Defense may authorize the military jurisdiction to seize of crimes, as well as related offenses, coming under the assize court of this department.

The ordinary court remains seized as long as the military authority does not claim the prosecution and, in all cases, until the order provided for in article 133 of the code of criminal investigation (1). If, subsequent to this order, the military authority competent to seize the military court claims this prosecution, the procedure is, notwithstanding the provisions of Article 24, last paragraph, of the Code of Military Justice, automatically brought before the indictment chamber provided for by article 68 of the military justice code, when the investigating chamber seized has not yet delivered its judgment, either before the competent military court ratione loci when a referral judgment has been returned. In the latter case, the provisions of paragraph below are applicable, and it is not necessary for the Court of Cassation to rule before the judgment on the appeals which may have been brought against this decree. The military tribunal is constituted and rules, under the conditions fixed in the last two paragraphs of article 10 of the code of military justice.

When the decree provided for in the paragraph of this article has been made, in the judicial districts specified in the said decree and for all the procedures referred to the military jurisdiction, no recourse may be exercised against the decisions of the investigating courts, including the referral judgment, with the exception of the opposition against the orders ruling on a request for provisional release before the indictments chamber, which will rule within two weeks. A new opposition can only be raised against an order issued more than two months after a previous rejection decision of the indictments chamber.

Cassation appeals against decisions of the investigating courts can only be brought after a judgment ruling on the merits and, if necessary, at the same time as the appeal against it. They are brought before a military court of cassation established by decree in accordance with articles 126 to 132 of the code of military justice and ruling under the formal and substantive conditions provided for in articles 133 to 155 of the said code.

No recourse, even in cassation, may also be exercised against the decisions of the ordinary courts of investigation ruling on the facts provided for in the said decree to the exclusion of the appeal before the indictment chamber.

NOTE: See article 181 of the Code of Criminal Procedure.

Violations of the provisions of articles 5, 6, 8, 9 and 11 (2 °) will be punished by imprisonment of eight days to two months and a fine of 5,000 to 200,000 F or one of these two penalties. only. Ex officio execution, by the administrative authority, of prescribed measures may be ensured notwithstanding the existence of these penal provisions.

The measures taken in application of this law cease to have effect at the same time as the state of emergency ends.

However, after the lifting of the state of emergency, the military courts continue to hear crimes and misdemeanors whose prosecution had been referred to them.

The state of emergency is declared on the territory of Algeria and for a period of six months.

A decree, taken in execution of article 2, will fix the zones in which this state of emergency will be applied.

The state of emergency declared by article 15 entails, for its duration, the application of article 11 of this law.

The President of the Council of Ministers, EDGAR FAURE.

The Minister Delegate at the Presidency of the Council, GASTON PALEWSKI.

The Keeper of the Seals, Minister of Justice, SCHUMAN.

The Minister of the Interior, MAURICE BOURGE-MAUNOURY.

The Minister of National Defense and the Armed Forces, PIERRE KOENIG.

The Minister of Finance and Economic Affairs, PIERRE PFLIMLIN.

The Minister of Public Works, Transport and Tourism, EDOUARD CORNIGLION-MOLINIER.

The Minister of Industry and Trade, ANDRE MORICE.

The Minister of Agriculture, JEAN SOURBET.

The Minister of Public Health and Population, BERNARD LAFAY.

The Minister of the Merchant Navy, PAUL ANTIER.

The Minister of Posts, Telegraphs and Telephones, EDOUARD BONNEFOUS.