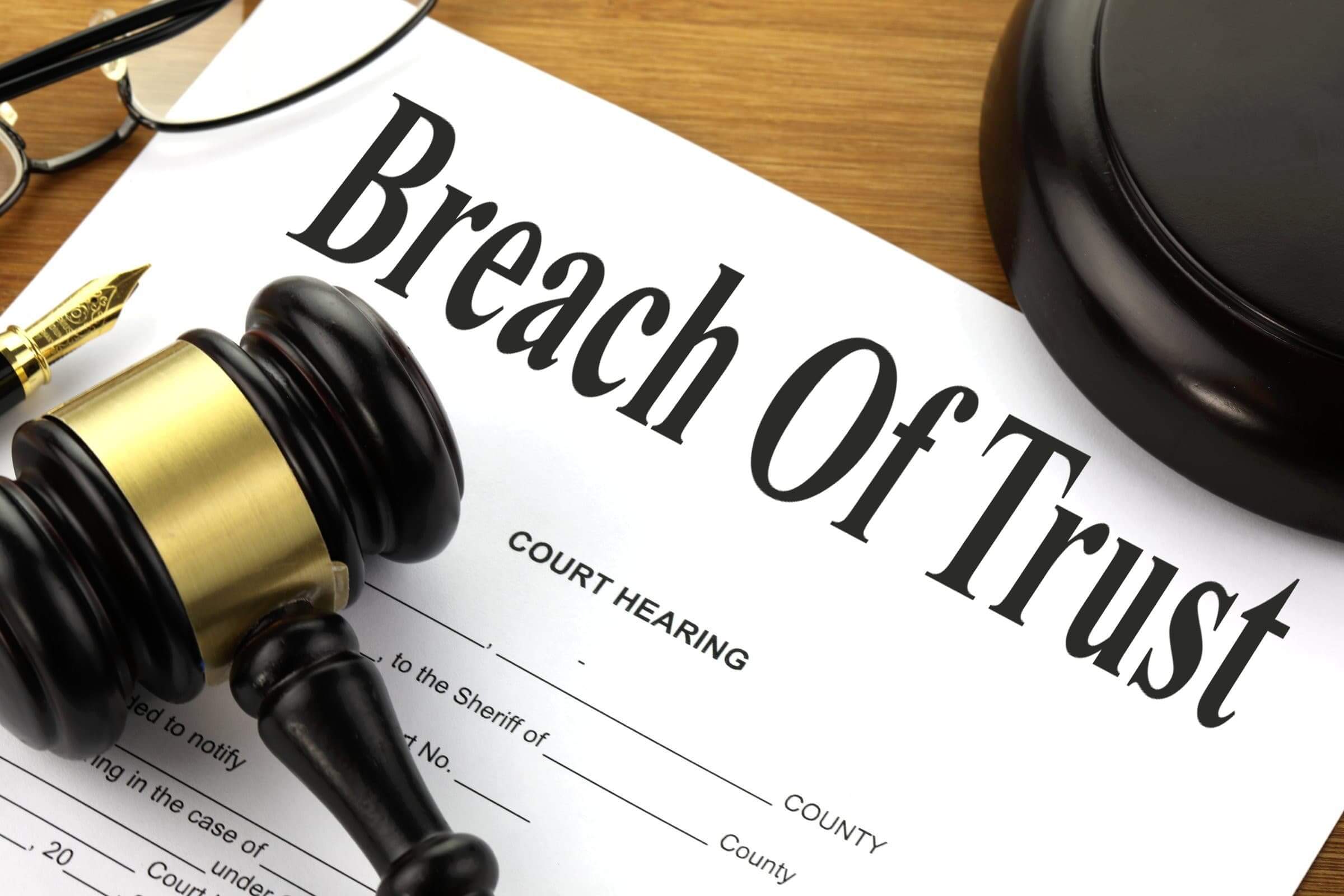 Breach of trust is defined by article 314-1 of the Penal Code as the act by a person of misappropriating, to the detriment of others, funds, securities or any property that has been handed over to him and that he has agreed to return them, represent them or make a specific use of them.

In the breach of trust the offender appropriates an object which has been given to him without using fraudulent means such as in a fraud . The thing was given to him and he did not take it away as in theft . Abuse of trust is the violence of contractual faith . Criminal law will intervene to criminalize the violation of contractual obligations under the civil law, the commercial law or consumer law .

CONDITIONS OF ABUSE OF TRUST

The precondition for the breach of trust is the handing over of the thing under a precarious detention contract. The building blocks are deliberate misappropriation for the benefit of the owner.

A contract must exist by virtue of which something is delivered to a person, who is responsible for making a specific use of it. The trial judge sovereignly assesses (except distortion) the nature of the contract. The nullity or illegality of the contract does not preclude the existence of the offense. The contract must be proved according to the methods of proof of civil law or commercial law.

The penal code no longer lists, like the old penal code, the contracts which can be the basis of a prosecution. The contract must include an obligation to return the thing that has been entrusted or to make a specific use of it. This is the case with the deposit , the hire, the leasing , the mandate, the loan for use, the pledge.

When the contract does not entail an obligation to return, but on the contrary transfers ownership, such as sale , there can be no breach of trust.

The discount which may give rise to breach of trust relates to funds, securities or any property. This excludes buildings.  The breach of trust can only relate to funds, securities, or any good, to the exclusion of a building; … the court of appeal, which cracked down on the misuse of real estate under cover of the non-return of the keys allowing access to it, ignored the meaning and scope of the aforementioned text ( Cass. crim . 10 October 2001 ). The thing must have a material content which excludes the services.

The thing can be any document, a customer file, a credit card, or simply the bank card number ( the defendant knowingly misappropriated the bank card number communicated by the customer for the sole payment of its order and, therefore, did not make the use agreed between the parties, the Court of Appeal characterized in all its elements, both material and intentional, the offense of breach of trust which it declared the defendant guilty) ( Cass. Crim. November 14, 2000 ) , etc.

Handing over the thing

Without surrender there is no breach of trust, but this surrender can be done directly or by a third party.

The surrender must be voluntary and it must be precarious. ” The breach of trust can only relate to funds, securities or goods given on a precarious basis ” (Cass. Crim. September 19, 2007)

The building blocks are misappropriation, harm and intention

Misappropriation, a material element of the offense

Diversion is the material element of the offense. It is carried out “as soon as the owner of the thing entrusted to no longer exercise his rights over it, as a result of the fraudulent actions of the one who held it “. (Cass. Crim. June 12, 1978).

The mere fact of embezzlement characterizes the breach of trust without the need for formal notice. The embezzlement is sufficient even if the defendant did not appropriate the thing or did not gain personal profit from it (Cass. Crim. 10 May 1989).

The consistency of the diversion

The hijacking can consist of an action or an omission. It is the result of unfair restitution or retention. It can also result from the use of the thing for purposes other than those which had been stipulated, from an abusive use and a misappropriation of purpose.

The offer of reimbursement or any compensation cannot be invoked.

Proof of the diversion

Failure to return alone is not sufficient proof of breach of trust. The existence of an act of embezzlement must be proven.

Regarding the intentional element, we can cite the following decisions

the intentional element of the offense results from the knowledge […] of the precarious situation of his company and of the deliberate use which he made of the funds collected in payment of the plane tickets and of which Y had remained owner, for purposes other than the reimbursement of the civil party  Cass. crim. October 24, 2001

Breach of trust is punishable by three years’ imprisonment and a fine of 375,000 euros.

The penalties are increased to seven years’ imprisonment and a fine of 750,000 euros when the breach of trust is carried out:
1 ° By a person who appeals to the public in order to obtain the delivery of funds or values ​​either for his own account, either as a manager or official or de jure or de facto of an industrial or commercial company;
2 ° By any other person who habitually engages in or lends his assistance, even on an ancillary basis, to transactions involving the property of third parties for whose account he collects funds or securities;
3 ° To the prejudice of an association which appeals to the public with a view to collecting funds for the purposes of humanitarian or social assistance;
4 ° To the prejudice of a person whose particular vulnerability, due to his age, to an illness, an infirmity, a physical or mental deficiency or a state of pregnancy, is apparent or known to the perpetrator.

The penalties are increased to ten years’ imprisonment and a fine of 1,500,000 euros when the breach of trust is carried out by a judicial representative or by a public or ministerial officer either in the exercise of or on the occasion of the exercise of its functions, or because of its quality.

Breach of trust not giving rise to prosecution

The provisions of article 311-12  are applicable to the offense of breach of trust.
Case law

Breach of trust and societies

Anyone who misappropriates the funds of a general partnership of which he is the manager is committing the crime of Cass. crim. April 10, 1992