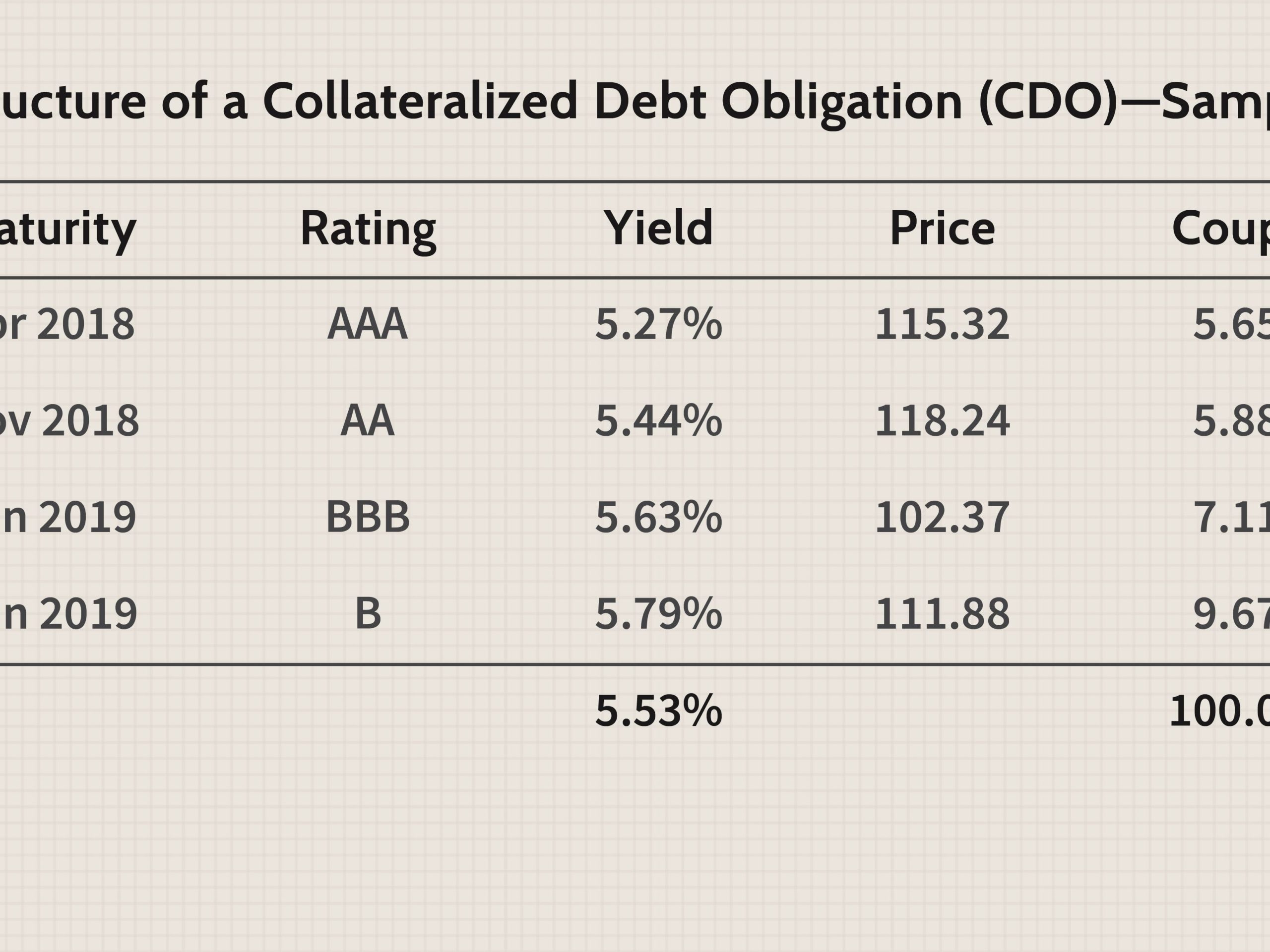 The collateralized debt obligations (CDOs) are a type of asset-backed security .  CDOs are issued by a special purpose company which will hold the assets and issue bonds.

The refund is made in order of seniority  according to a mechanism described as the cascade (waterfall) . The level of remuneration is on the contrary in reverse order to take into account the level of risk.

The purpose of CDOs is to sell the investor a product at risk which would be determined, decoupled from that of the underlying assets, with a range of products. The underlying assets are various loans granted to individuals or companies, by banks or other investors. Various default risk loans can be mixed, the less risky toning the more risky. In addition, various other techniques are used to enhance credit: assets subject to loans are used to hedge risk, but also credit swaps.

CDOs began to be issued at the end of the 1980s. They experienced strong growth from 2001 on the basis of modeling ( David X. Li’s Gaussian copula model ) for their valuation.

Squared (CDO²) or cube (CDO 3 ) CDOs are created. A CDO² is created by putting together a certain number of CDO’s, a CDO 3  groups together  CDO²    and includes thousands of titles

The rating agencies (S & P, Moody’s and Fitch) use for rating CDO’s a mathematical model called the Monte Carlo simulation. Rating agencies put all the data concerning CDOs (information on bonds and securitizations and the types of credit used for the package) in a database and process this data with software that calculates the probability that the assets of the CDO’s will fail in hypothetical financial and business stressful situations, with a random program said to “roll the dice” over 100,000 times

In addition, the complexity of the analysis of CDO² and CDO 3 exceeds any methodology and the ratings are purely arbitrary.

These techniques have been used for subprimes , with loans to individuals, but also for companies to which loans have been granted exceeding the debt capacity according to credit standards.

The modeling assumptions are questionable, with a very high vulnerability to variations in assumptions. The awareness of this vulnerability is, beyond the failures of borrowers, the reason for the panic that has gripped the markets in the subprime business .

The development of CDOs

75% of CDO’s sales were made in the United States, and half of the CDO’s sold in the United States in 2006 contained subprime debt. On average 45% of the contents of these CDOs consisted of subprime residential mortgage loans. In certain classes of CDO’s (mezzanine asset backed CDO’s) the proportion of subprume mortage debt went up to 75%.

CDO’s, loaded with risky debt ranging from junk bonds to subprime mortgage loans, were sold as high yield investment grade securities (they were sold in May 2007 with yields of up to 10%).

In June 2007 Bear Stearns placed the riskier portions of CEOs in pension funds, in particular Calpers and the Texas Teachers Fund.

The structuring of CDOs generated $ 1 billion for Citigroup and Merril Lynch.