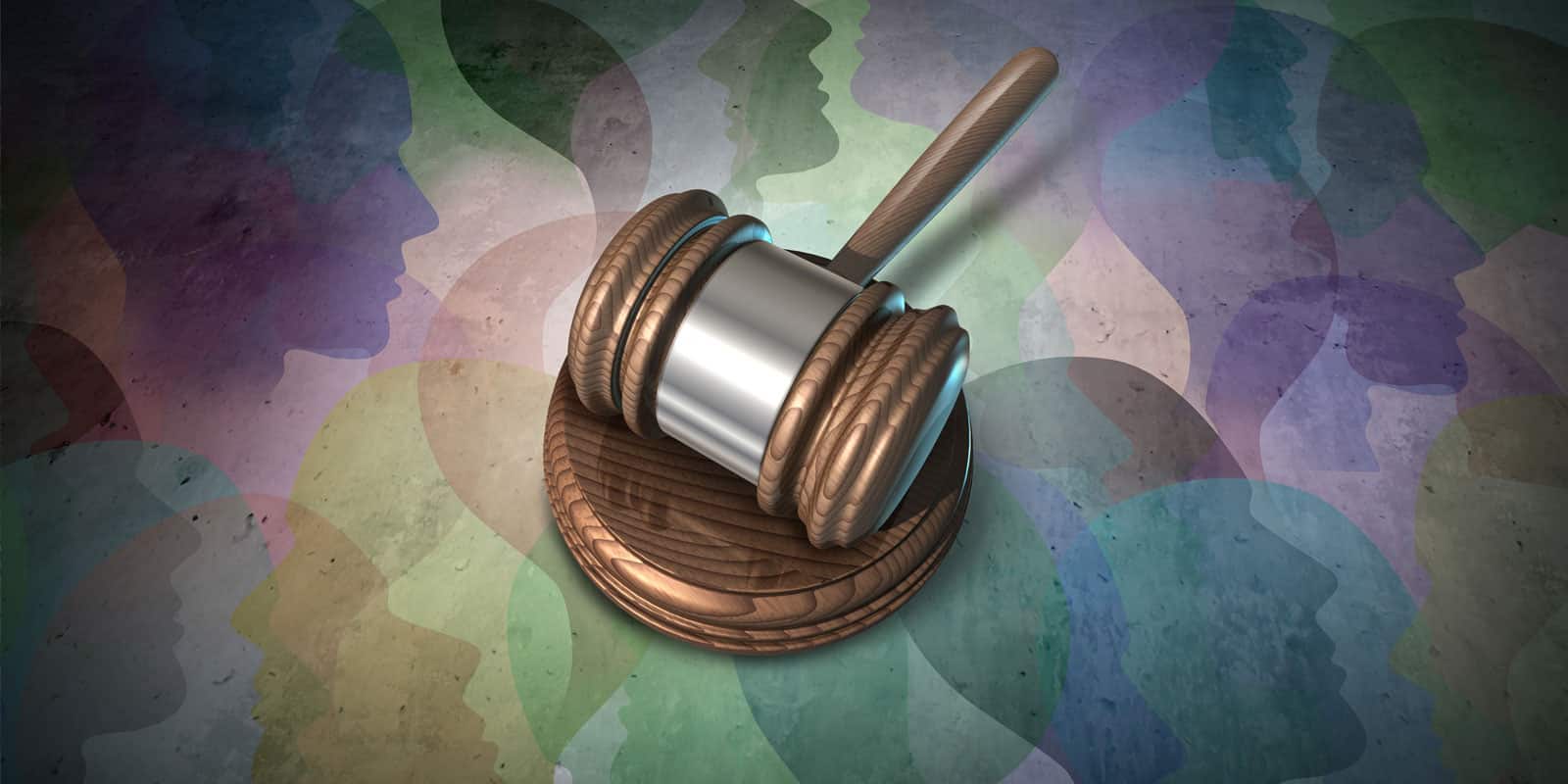 However, because of the requirements of the investigation or as a security measure, it may be subject to one or more obligations of judicial control. When these prove to be insufficient with regard to these objectives, she may, exceptionally, be placed in pre-trial detention.

Judicial control is ordered by the examining magistrate , who decides after having received the requisitions from the public prosecutor.

Judicial control can also be ordered by the judge of freedoms and detention, when seized.

article 138 and s . of the Code of Criminal Procedure

Judicial control can be ordered by the examining magistrate or by the liberty and detention judge if the charged person faces a prison sentence or a more serious one.
This control obliges the person concerned to submit, according to the decision of the investigating judge or the judge of freedoms and detention, to one or more of the obligations listed below:
1 ° Not to go beyond the territorial limits determined by the judge of instruction or the judge of freedoms and detention;
2 ° To be absent from his domicile or from the residence fixed by the examining magistrate or the judge of freedoms and detention only under the conditions and for the reasons determined by this magistrate;
3 ° Not going to certain places or only going to places determined by the examining magistrate or the liberty and detention judge;
4 ° Inform the examining magistrate or the liberties and detention judge of any movement beyond determined limits;
5 ° Report periodically to the services, authorized associations or authorities appointed by the examining magistrate or the liberty and detention judge who are required to observe the strictest discretion on the charges against the person under investigation;
6 ° Respond to summons from any authority, association or qualified person designated by the examining magistrate or the liberty and detention judge and submit, if necessary, to control measures relating to his professional activities or on his attendance at an education as well as socio-educational measures intended to promote his social integration and prevent the renewal of
7 ° Submit either to the registry, or to a police service or a gendarmerie brigade all documents supporting identity, and in particular the passport, in exchange for a receipt valid as proof of identity;
8 ° Refrain from driving all vehicles or certain vehicles and, where applicable, hand in your driving license against receipt to the registry; however, the examining magistrate or the liberties and detention judge may decide that the person under examination may use his driving license for the exercise of his professional activity;
9 ° Refrain from receiving or meeting certain persons specially designated by the investigating judge or the liberty and detention judge, as well as from entering into contact with them in any way whatsoever;
10 ° Submit to examination, treatment or care measures, even under the regime of hospitalization, in particular for the purposes of detoxification;
11 ° Provide a bond, the amount and time of payment, in one or more installments, are set by the investigating judge or the judge of freedoms and detention, taking into account in particular the resources and charges of the person in charge. exam ;
12 ° Not to engage in certain activities of a professional or social nature, excluding the exercise of elective mandates and union responsibilities, when the offense was committed in the exercise or on the occasion of the exercise of these activities and when it is feared that a new offense will be committed. When the activity concerned is that of a lawyer, the Bar Council, referred to by the investigating judge or the liberty and detention judge, alone has the power to pronounce this measure subject to appeal, under the conditions provided for in Article 24 of Law No. 71-1130 of December 31, 1971 reforming certain judicial and legal professions;
13 ° Not to issue checks other than those which exclusively allow the withdrawal of funds by the drawer from the drawee or those which are certified and, where applicable, hand over to the registry the forms of checks the use of which is prohibited;
14 ° Not to hold or carry a weapon and, if necessary, hand over to the registry against receipt the weapons in its possession;
15 ° Constitute, within a time limit, for a period and an amount determined by the examining magistrate or the liberty and detention judge, personal or real securities;
16 ° Justify that it contributes to family expenses or regularly pays the maintenance that it has been ordered to pay in accordance with judicial decisions and legally approved agreements relating to the obligation to pay benefits, subsidies or contributions to the expenses of marriage;
17 ° In the event of an offense committed either against his spouse, his cohabiting partner or his partner bound by a civil solidarity pact, or against his children or those of his spouse, cohabiting partner or partner, reside outside the domicile or residence of the couple and , where applicable, refrain from appearing in this home or residence or in the immediate vicinity thereof, as well as, if necessary, undergo health, social or psychological care; the provisions of this 17 ° are also applicable when the offense is committed by the former spouse or partner of the victim, or by the person having been bound to him by a civil solidarity pact,
The obligation provided for in 2 ° may be performed, with the consent of the interested party gathered in the presence of his lawyer, under the regime of placement under electronic surveillance, using the procedure provided for in article 723-8. Articles 723-9 and 723-12 are applicable, the investigating judge exercising the powers attributed to the judge responsible for the application of sentences.
The methods of application of this article, in particular with regard to the authorization of persons contributing to judicial control and placement under electronic surveillance, are determined as necessary by a decree in the Council of State.

When the indicted person is prohibited from receiving or meeting the victim or entering into any relationship whatsoever with him in application of the provisions of 9 ° of article 138, the examining magistrate or the judge of freedoms and detention sends the latter a notice informing it of this measure; if the victim is a civil party, this notice is also sent to his lawyer.
This notice specifies the consequences likely to result for the person under investigation from non-compliance with this prohibition.

Order of the investigating judge for placement under judicial supervision

The indicted person is placed under judicial supervision by an order of the examining magistrate which can be taken at any stage of the investigation.

The examining magistrate can, at any time, impose on the person placed under judicial supervision one or more new obligations, remove all or part of the obligations included in the control, modify one or more of these obligations or grant an occasional or temporary exemption. observe some of them.

If the indicted person voluntarily evades the obligations of judicial control, the examining magistrate may issue an arrest or arrest warrant against him. He may also, under the conditions provided for in the fourth paragraph of article 137-1, refer a case to the liberties and detention judge for the purposes of placement in pre-trial detention. Whatever the imprisonment penalty incurred, the judge of freedoms and detention may issue, against this person, a committal warrant with a view to his provisional detention, subject to the provisions of article 141- 3.
If the person evades the obligations of judicial control when he is referred to the trial court, the public prosecutor may, except in the case provided for by article 272-1, refer the matter to the liberties and detention judge. for the latter to issue a warrant of arrest or to bring against him. This magistrate is also competent to order, in accordance with the provisions of article 135-2, the placement in pre-trial detention of the person concerned.

When the Charged Person is required to provide security or provide security, this bond or these securities guarantee:
1 ° The representation of the Charged Person, the accused or the accused in all acts of the proceedings and for the execution of the judgment, as well as, where applicable, the execution of other obligations imposed on it;
2 ° Payment in the following order:
a) Compensation for damage caused by the offense and restitution, as well as the maintenance debt when the accused person is prosecuted for the default of payment of this debt;
b) Fines.
The decision of the investigating judge or the liberty and detention judge determines the sums allocated to each of the two parts of the bond or sureties. The examining magistrate or the liberty and detention judge may however decide that the sureties will guarantee in their entirety the payment of the sums provided for in 2 ° or one or the other of these sums.
When the sureties guarantee, in part or in whole, the rights of one or more victims who have not yet been identified or who have not yet become civil parties, they are established, under conditions specified by decree of the Council of State. , in the name of a provisional beneficiary acting on behalf of these victims and, where applicable, of the Treasury. Surety bond and rights of the victim or creditor of a maintenance debt

The investigating judge or the liberty and detention judge may, with the consent of the person charged, order, or decide, that the part of the bond allocated to guaranteeing the rights of the victim or the creditor of a maintenance debt is paid to them by provision, at their request.
This payment can also be ordered, or decided, even without the consent of the person under investigation, when an enforceable court decision has granted the victim or the creditor a provision on the occasion of the acts which are the subject of the charges. lawsuits.

The amount allocated to the second part of the security which has not been paid to the victim of the offense or to the creditor of a maintenance debt is returned in the event of non-suit and, unless the application of the Article 372, in the event of absolution or acquittal.
In the event of a conviction, he is employed in accordance with the provisions of 2 ° of article 142.
The second part of the sureties is lifted or the debts that this part guarantees are recovered according to the distinctions provided for in the two preceding paragraphs.