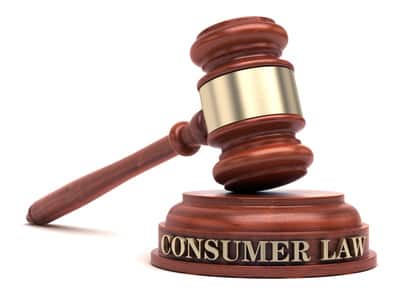 Consumer law stems from the development of the consumer movement for the protection of consumers in their relations with businesses. Born in the United States and symbolized by the action of Ralph Nader in particular against car manufacturers, the consumer movement has led lawmakers to develop rules protecting consumer consent and safety

In France, consumer law first took the form of the 1978 law which was then codified in a Consumer Code. Consumer law derogates from the fundamental philosophy which had presided over the drafting of the codes whose objective was the identity of the rules applicable to all the contracting parties in the same situation. Consumer law sometimes complements contract law, but in particular during the administrative control efforts of unfair terms, it has also in fact come up against the protection of the co-contracting party resulting from case law rules. It is strongly influenced by the rules of European law on consumer protection.

In market regulation, consumer law sometimes complements competition law and in other circumstances it may have opposing objectives.

Consumer law was codified in the Consumer Code which resulted from the law of July 26, 1993 . The Consumer Code contains rules concerning consumer protection in particular against certain forms and techniques of sale, rules for controlling the content of the contract and rules protecting against purchases resulting from impulses, pressures or maneuvers in order to ” ensure the protection of consumer consent .