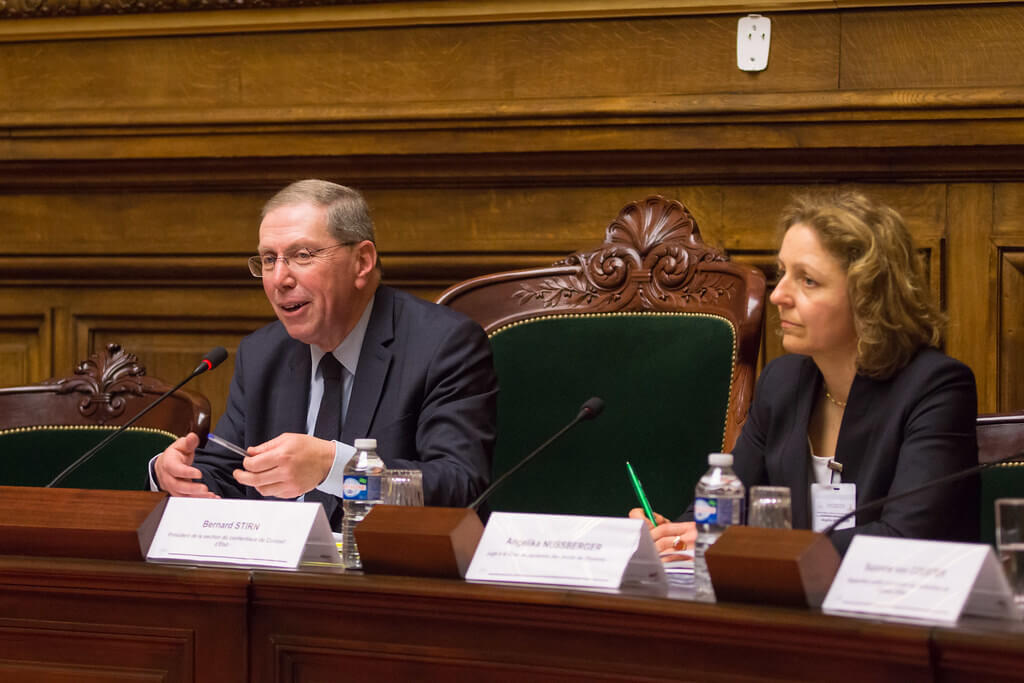 ON BEHALF OF THE FRENCH PEOPLE

THE COURT OF CASSATION, CRIMINAL CHAMBER, in its public hearing held at the Palais de Justice in PARIS, on May 6, two thousand and three, delivered the following judgment:

On the report of the referendum adviser DESPORTES, the observations of the professional civil society MONOD and COLIN, lawyer in the Court, and the conclusions of the lawyer general DAVENAS;

Deciding on the appeal brought by
B. Alain, known as MATHIUS,

against the judgment of the court of appeal of VERSAILLES, Sème chambre, dated December 13, 2001, which, on referral after cassation, condemned him for public defamation and public insult to 50,000 francs fine suspended, a ordered the publication of the decision and pronounced on the civil interests;

Considering the pleadings produced in demand and in defense

I – On the public action

Whereas, according to article 2, 3 °, of the law of August 6, 2002, are amnestied, when, as in the present case, they are prior on May 17, 2002, press offenses; that thus the public action is extinguished with regard to the accused;

Whereas, however, that, according to article 21 of the aforementioned amnesty law, the trial court seised of the

II – On the civil action:

“in that the Court of Appeal, ignoring the absence of Alain B. at the hearing of the debates of September 27, 2001 and his request for referral to a subsequent hearing, retained the case at this hearing and pronounced on the merits by contradictory judgment;

while the defendant called to appear before the correctional court, either for an offense punishable by a fine or imprisonment for less than two years, or on direct summons from the civil party, regardless of either the length of the sentence incurred, can only be tried in his absence, even after his defense counsel has been heard, if he has made the request by letter addressed to the president and attached to the proceedings file; in the present case, it emerges from the procedural documents that, far from asking to be tried in his absence, Alain B., prosecuted at the sole request of the civil party on the counts of defamation and public insults towards an individual, has , by a letter addressed to the president one week before the hearing by his lawyer and by submissions filed at the hearing by the latter, unambiguously expressed his willingness to appear personally before the criminal court; that judging however in his absence, only his lawyer having been heard, and ruling by a contradictory judgment, the Court of Appeal violated the texts and principles referred to above;

not opposed the counsel of the civil party; that by limiting itself to mentioning in its judgment that the defendant who did not appear was represented by his (metropolitan) counsel, without responding to the request for referral before it, the court of appeal tainted its decision to failure to rule and, at the very least, lack of reasons “;

Whereas the applicant cannot complain that the Court of Appeal failed to respond to the conclusions requesting the referral of the case for the purpose of allowing his personal appearance, since he was represented at the hearing by a lawyer of his choice who has pleaded on the merits and that he has filed submissions on the merits to which the judges have responded;

From which it follows that the plea can only be rejected

“in that the judgment under appeal declared Alain B. guilty of the offenses of defamation and public insult towards an individual, in this case towards Annie W. known as R.;

that of course, the possibility, for a malicious third party, of being able to manufacture such documents does not mean that this is a case of forgery; that the same goes for the accusation of hijacking; that Alain B., alias Mathius never brought any action to denounce the piracy which would have resulted in exposing him to criminal prosecution; that it also appears unlikely that we could have entered the website continuously for twelve days without its owner noticing, while certain writings surrounding the disputed article were modified or outright changed; that alias Mathius always appeared, in particular by offering, in court to prove the truth of the defamatory facts, as the only intellectual author of the incriminated remarks; that in addition, after the cardiac problem which was worth to Alain B. alias Mathius to interrupt his activities, an editorial dated December 23, 1999, signed by his “faithful friend” Stanley Cross, stated that as regards the remarks defamatory and insulting, Mathius had only “forced the line to make things more perfect, like an artist”; that this paternity is confirmed by a multimedia chronicle of the weekly Tiki Magazine which highlights, at the end of August 1999, the site of Mathius, described as the most delirious of Polynesia; that on this point, Jean-Marc M. and Jérôme J., whose testimonies were regularly added to the debates, certify having on several occasions and in particular in July 1999, read on the site “www.Mathius.org” under the home page heading “the artist’s laughter, confidential letters”, the editorial implicating Annie W. known as R. signed Mathius which was able to be printed by them; that these testimonies were not attacked judicially either; that it is appropriate, consequently, to retain Alain B. in the links of prevention as an accomplice of the facts referred to in the quotation;

“then, on the one hand, that by declaring, in the operative part of his judgment, Alain B.” guilty of the offenses of defamation and public insults “after having retained, in the reasons for this judgment, that Alain B.” not being the owner of the site at the date of the incriminated facts “he could only be retained in the links of the prevention as author of the incriminated remarks” as an accomplice of the facts targeted by the prevention “the court of appeal tainted his decision of an irreducible contradiction;

“then, on the other hand, that the provisions of articles 42 and 43 of the law of July 29, 1881 are only applicable to the written press; that the determination of persons criminally responsible for the offenses of defamation and public insults committed by the way of the Internet network, before the intervention of the law of August 1, 2000 inapplicable in this case, must be established according to the rules of the common law; that by affirming the contrary and by deducting the criminal responsibility of Alain B. as accomplice in the offense of defamation and public insult of her sole capacity as author of the incriminated article without indicating how Alain B. would have knowingly allowed this article to acquire a public character by its distribution on a website of which she herself admitted that he was not the owner, the court ofappeal characterized neither the existence of an act of complicity of common law nor the guilty intention of the applicant, and violated the aforementioned texts,

“then, finally, that it is for the prosecuting party to prove the materiality of the remarks invoked as being defamatory and insulting; that in this case, Alain B. argued that the printed document on the basis of which the proceedings had been implemented, supposed to be the reproduction of the offending article disseminated via the Internet network on the site www.mathius.org, was not sufficient to establish the content of this article, as it was readable in electronic form when consulting the site; by requiring the accused to prove the falsity of the printed document and by stating irrelevant reasons with regard to whether the disputed article was drafted in the same terms on the electronic document placed in online and on the printed document that served as the basis for the prosecution,alone versed in the debates, the Court of Appeal did not give a legal basis to its decision “;

Whereas it follows from the judgment under appeal and from the procedural documents that Annie W., known as R., had Alain B., known as Mathius, summoned before the criminal court on charges of public insult and defamation for good reason. the Internet distribution, as of July 12, 1999, on the site “www.mathius.org” of an article entitled “Lesclaffaite de l’Artiste, letters confidential”;

Whereas in the state of these reasons proceeding from its sovereign assessment, from which it follows that the defendant was the author of the insulting and defamatory remarks and that he intended to disseminate them, the court of appeal justified its decision;

That, if it is wrong that the judges applied article 43 of the law of July 29, 1881 whereas, the alleged offenses having been committed by a means of audiovisual communication within the meaning of article 2 of the law n ° 86-1067 of September 30, 1986, only the provisions of article 93-3 of law n ° 82.652 of July 29, 1982 were applicable, however, the contested judgment does not incur censorship, therefore that in application of this text, the same rules were applicable to the accused;

That, moreover, the mention of the operative part of the judgment under appeal declaring Alain B. guilty of the offenses of public defamation and insult, whereas only the complicity of these offenses had been retained against him, proceeds from a simple error material that cannot give rise to cassation;

From where it follows that the means must be rejected

And expected that the judgment is regular in the form

I – On the public action

II – On the civil action

Thus judged and pronounced by the Court of Cassation, criminal chamber, in its public hearing, the day, month and year above;
Were present at the debates and deliberation: Mr. Cotte president, Mr. Desportes advisor rapporteur, Mr. Joly, Ms. Chanet, Anzani, Mazars, MM. Beyer, Pometan councilors of the chamber, MM. Ponsot, Valat, Mme Ménotti referendum advisers:
Advocate General: M. Davenas;
Clerk of the chamber: Mr Souchon
In witness whereof this judgment has been signed by the president, the rapporteur and the clerk of the chamber