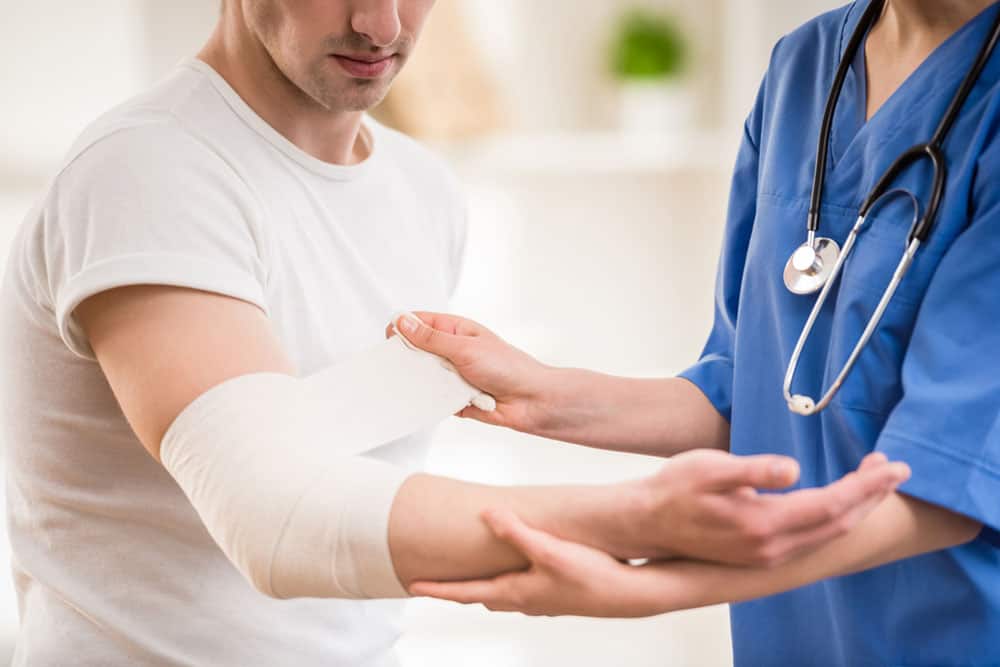 Work Accident And Return To Work Without A Return Medical Visit

Whereas MX … worked for the company Valentin traiteur within the framework of various contracts of mission concluded with the company Vedior Bis; that he was engaged by the company Valentin caterer on May 30, 2001 by employment contract indefinite with effect from June 5, 2001, as handling agent; that he was victim on March 2, 2002, of a work accident; that he resumed his work on April 3, 2002 without passing medical examination of recovery before giving his resignation by letter undated; that he seized the industrial tribunal of various requests;

Whereas the employer complains to the contested judgment (Lyon, July 1, 2005) of having reclassified the temporary assignment contracts of Mr X … as an indefinite contract since December 14, 2000, then, according to the means:

1 / that the succession of temporary employment contracts does not have the effect of permanently filling a job when the temporary employee is alternately entrusted with different missions to fill separate positions due to different reasons; in the present case, the Court of Appeal found that Mr X … had been hired by twenty-seven successive mission contracts for reasons of replacement or increase in work and to perform alternately the cleaning of the rolls carts and utensils and the filling of quality sheets (manual work); whereas considering that these contracts, although concluded alternately to carry out different missions and for different reasons, had the object or effect of permanently filling a job related to the

2 / that the judgments must be motivated, the contradiction of reasons equivalent to a lack of reasons; in the present case, to grant the request for requalification of the temporary employment contracts of Mr X …, the court of appeal stated that he had been hired and maintained for more than six months in “the same tasks “within the user company; that in determining himself thus, while noting previously that under the terms of his mission contracts, he had been hired alternately to carry out the cleaning of the rolls and utensils trolleys and to fill out quality sheets, which constituted separate tasks, the court of appeal, which ruled on contrary grounds, violated article 455 of the new code of civil procedure;

3 / that an employee can be hired by successive temporary employment contracts to perform tasks related to the normal and permanent activity of the company as long as the employer justifies that these tasks are not carried out on a long-term basis but only to do faced with a temporary increase in their usual activity or to replace an absent employee; in the present case, the Court of Appeal deduced from what Mr X … had performed for more than six months tasks related to the normal and permanent handling activity of the company the conclusion that its twenty-seven successive temporary employment contracts had to be reclassified; that by being determined by such an inoperative reason, without investigating whether the temporary increase in

But given that under the first paragraph of Article L. 124-2 of the Labor Code, the temporary employment contract can neither have the object nor the effect of permanently filling a job linked to normal and permanent activity. of the user company; that according to the second paragraph of this text, a user can only call on temporary workers for the execution of a precise and temporary task called “mission”, and only in the cases listed in article L. 124- 2-1, and in particular in the event of a temporary increase in activity; that it follows that, in the latter case, the use of temporary workers can only be authorized for the needs of one or more tasks resulting from the only temporary increase in the activity of the

And whereas the Court of Appeal, noted that the employee, engaged by the user company without interruption, by twenty-seven temporary assignment contracts, from December 14, 2000 to June 8, 2001, for durations and periods of renewal identical, alternately to carry out the cleaning of equipment, and to fill out quality sheets, this same work of material handler always being carried out at night, so that he had accomplished within the framework of these missions, the same tasks, linked to a normal and permanent handling activity of this company; that it is therefore rightly that it requalified contracts of temporary work contract indefinite;

From which it follows that the means, which is not founded in any of its branches, cannot be accepted;

And on the second means:

Whereas the employer criticizes the judgment under appeal for having ordered him to pay damages to the employee for non-compliance with article R. 241-51 of the labor code, then, according to the means:

1 / that the failure of the employer to its obligation to make pass a visit of recovery causes the employee a compensable damage only if it is found that this deficiency prevented him from resuming his previous work; in the present case, the Court of Appeal found that Mr X … had been the victim of an industrial accident on March 2, 2002, that “on April 3, 2002, the occupational physician declared it consolidated without sequelae compensable and the same day, Mr X .. resumed his work without passing visit recovery “; that by affirming nevertheless that the failure of the employer to carry out a follow-up visit had “necessarily” caused the employee compensable damage, the court of appeal violated article R.

2 / that the recovery visit, the initiative of which normally belongs to the employer, can also be requested by the employee, either from his employer, or from the occupational physician by notifying the employer of this request; that the employee, who does not request the visit recovery, can not claim to have suffered damage solely because of the absence of this visit; that by affirming in this case that the failure of the employer to proceed with the recovery visit had necessarily caused prejudice to the employee without explaining, as she was invited, on the absence of initiative of the employee to provoke this visit of recovery, the court of appeal deprived its decision of legal basis with regard to article R. 241-51 of the labor code;

But given that it results from Article L. 230-2 of the Labor Code, interpreted in the light of EEC Directive n ° 89/391 of 12 June 1989, concerning the implementation of measures aimed at promoting improvement of the safety and health of workers at work as well as of article R. 241-51 of the labor code, that the employer, given an obligation of safety of result in terms of health protection and the safety of workers in the company, must ensure its effectiveness; that he cannot therefore let an employee return to work after a period of absence of at least eight days due to an accident at work without allowing him to benefit when resuming work, or at the latest within eight days of it, of an examination by the occupational physician to assess his ability to return to his old job, the need for an adaptation of working conditions or rehabilitation or possibly both of these measures; that the non-respect by the employer of its obligations relating to the medical examination of recovery necessarily causes the employee a prejudice;

And whereas the Court of Appeal, which revealed that the employee had resumed his work and continued to work beyond the eight days of the resumption without passing the medical examination provided for by paragraphs 1 to 3 of article R. 241-51 of the labor code, legally justified its decision;

From which it follows that the means is not founded in any of its branches;

Orders the company Valentin caterer to pay the costs;

Thus done and judged by the Court of Cassation, social chamber, and pronounced by the president in his public hearing on December 13, two thousand and six.

On the plea raised automatically after notice given to the parties:

Having regard to article L 230-2, I, of the Labor Code interpreted in the light of Directive EC n ° 89/391 of 12 June 1989, concerning the implementation of measures aimed at promoting the improvement of safety and the health of workers at work; together Articles L. 122-32-2 and R. 241-51 of the French Labor Code;

Whereas the employer, bound by an obligation of security of result in terms of protection of the health and safety of workers in the company, must ensure its effectiveness; that he cannot therefore let an employee return to work after a period of absence of at least eight days due to an accident at work without allowing him to benefit when resuming work, or at the latest within eight days thereafter, an examination by the occupational physician intended to assess his ability to return to his former job, the need for an adaptation of working conditions or rehabilitation or possibly one and the other. other of these measures; that failing this, the employer cannot terminate the employee’s indefinite employment contract,

Whereas, according to the judgment under appeal, Mr X …, engaged on September 26, 1994 by the company Cubit France technologies as a technical agent, was the victim, on September 8, 1999, of a work accident causing a work stoppage until December 6, 1999, then, following a relapse, from January 25, 2000 to May 10, 2000; that the employee resumed on this date his activity without having been subjected to the medical examination of recovery; that having been, before and after these stops for accident at work, in stoppage of work for illness, his employer dismissed him on November 27, 2000 for repeated absences disorganizing the company and requiring his replacement definitive;

That by ruling thus, the court of appeal violated the aforementioned texts;

FOR THESE REASONS and without there being any need to rule on the single ground of appeal:

BREAK AND CANCELED, in all its provisions, the judgment rendered on March 31, 2004, between the parties, by the Douai Court of Appeal; returns, consequently, the cause and the parts in the state where they were before the aforementioned judgment and, to be done right, returns them before the court of appeal of Amiens;