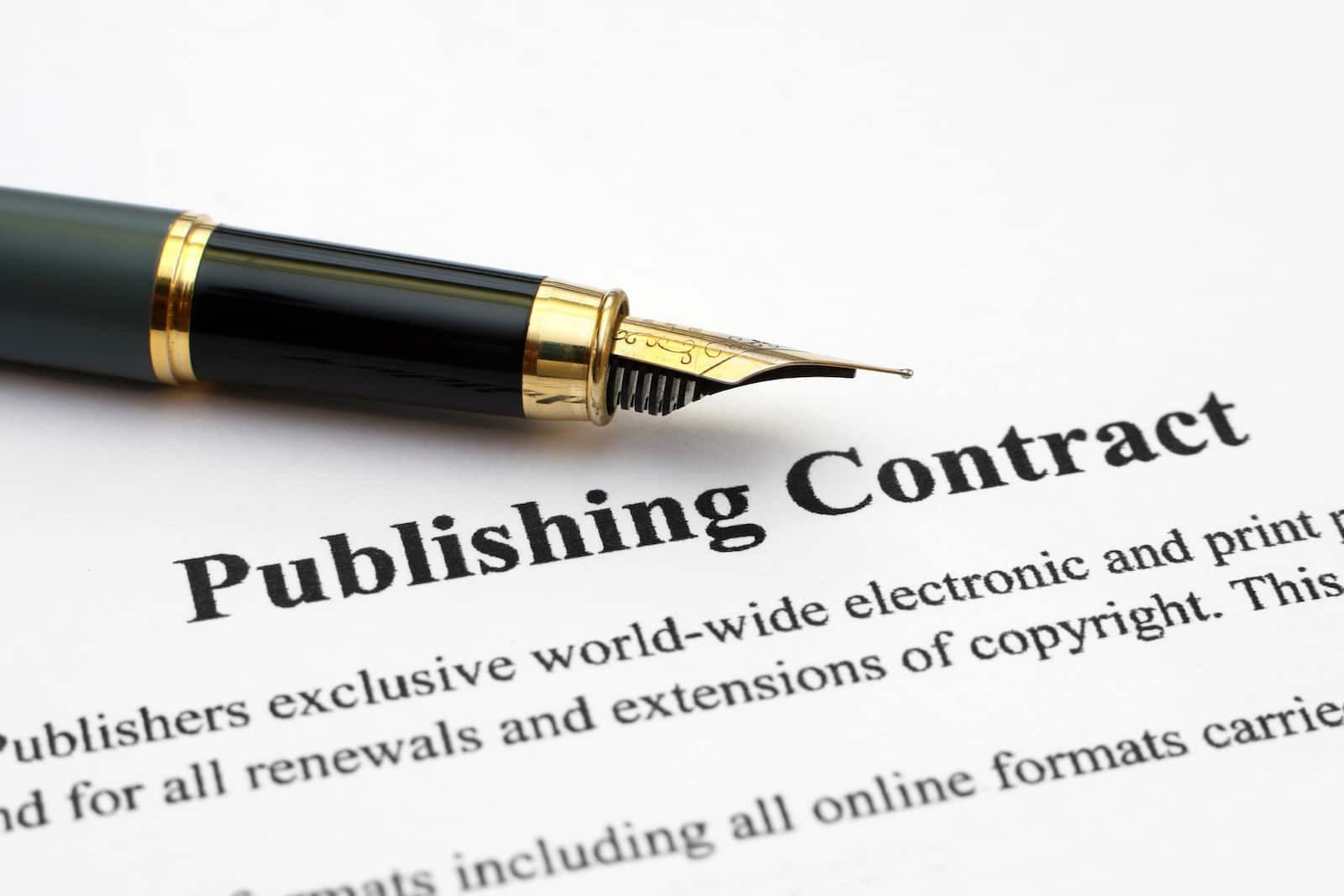 The publishing contract is the contract by which the author of a work of the mind or his successors in title assign on specific conditions to a person called the publisher the right to manufacture or have manufactured in large numbers copies of the work, it being responsible for its publication and distribution.

The so-called author’s contract does not constitute a publishing contract within the meaning of Article L. 132-1.
By such a contract, the author or his successors in title pay the publisher an agreed remuneration, on condition that the latter produce in number, in the form and according to the modes of expression determined in the contract, copies of the work and ensure its publication and dissemination.
This contract constitutes a work lease governed by the convention, the customs and the provisions of articles 1787 and following of the civil code.

The so-called half-account contract does not constitute a publishing contract within the meaning of Article L. 132-1.
By such a contract, the author or his successors in title instruct a publisher to manufacture, at his expense and in number, copies of the work, in the form and according to the modes of expression determined in the contract, and to ensure publication and dissemination, with a reciprocal commitment to share operating profits and losses, in the proportion provided.
This contract constitutes a joint venture. It is governed, subject to the provisions of Articles 1871 et seq. Of the Civil Code, by convention and custom.

The stipulation by which the author undertakes to grant a preferential right to a publisher for the publication of his future works of clearly determined genres is lawful.
This right is limited for each genre to five new works from the day of the signing of the publishing contract concluded for the first work or to the author’s production produced within five years from the same day.
The publisher must exercise the right granted to him by making his decision known in writing to the author, within three months from the date of delivery by the latter of each final manuscript.
When the publisher benefiting from the preferential right has successively refused two new works presented by the author in the genre determined in the contract, the author may immediately and automatically resume his freedom as to future works that he will produce in this genre. . However, if he has received advances from the first publisher for his future works, he must first reimburse them.

The contract may provide either for remuneration proportional to operating income or, in the cases provided for in Articles L. 131-4 and L. 132-6, a fixed remuneration.

With regard to the bookstore edition, the author’s remuneration may be the subject of a fixed remuneration for the first edition, with the expressly expressed agreement of the author, in the following cases:
1º Scientific works or techniques;
2º Anthologies and encyclopedias;
3 ° Prefaces, annotations, introductions, presentations;
4 ° Illustrations of a work;
5 ° Deluxe limited edition editions;
6º Prayer books;
7 ° At the request of the translator for translations;
8º Popular editions at low cost;
9º Inexpensive children’s books.
The transfer of rights to or by a person or a company established abroad may also be the object of a fixed remuneration.
With regard to intellectual works published in newspapers and periodicals of all kinds and by press agencies, the remuneration of the author, linked to the information company by a book rental contract or services, can also be fixed at a flat rate.

The author’s personal and written consent is required.
Without prejudice to the provisions which govern contracts entered into by minors and adults under guardianship, consent is even required in the case of a legally incapable author, unless the latter is physically unable to give his consent.
The provisions of the previous paragraph are not applicable when the publishing contract is signed by the author’s rights holders.

The author must guarantee the publisher the peaceful and, unless otherwise agreed, the exclusive exercise of the assigned right.
He is required to ensure that this right is respected and to defend it against any attacks that may be brought to him.

The author must put the publisher in a position to manufacture and distribute copies of the work.
He must deliver to the publisher, within the period specified in the contract, the object of the edition in a form which allows normal production.
Unless otherwise agreed or technically impossible, the object of the edition provided by the author remains the property of the latter. The publisher will be responsible for this for the period of one year after completion of manufacture.

The publishing contract must indicate the minimum number of copies constituting the first printing. However, this obligation does not apply to contracts providing for a minimum of copyright guaranteed by the publisher.

The publisher is required to carry out or have the production carried out according to the conditions, in the form and according to the modes of expression provided for in the contract.
He may not, without the written authorization of the author, make any modification to the work.
It must, unless otherwise agreed, include on each copy the name, pseudonym or trademark of the author.
In the absence of a special agreement, the publisher must produce the edition within a time limit set by the customs of the profession.
In the event of a fixed-term contract, the rights of the assignee automatically expire at the end of the period without the need for formal notice.
The publisher may however proceed, for three years after this expiration, to the sale, at the normal price, of the copies remaining in stock, unless the author prefers to purchase these copies for a price which will be set at experts in the absence of an amicable agreement, without this right recognized to the first publisher preventing the author from having a new edition carried out within thirty months.

The publisher is required to ensure a permanent and continuous exploitation and commercial distribution of the work, in accordance with the practices of the profession.

The publisher is required to provide the author with all supporting documentation to establish the accuracy of his accounts.
Failure by the publisher to provide the necessary justifications, he will be forced to do so by the judge.

The publisher’s receivership does not result in the termination of the contract.
When the activity is continued in application of articles 31 and following of the law n ° 85-98 of January 25, 1985 relating to the judicial reorganization and liquidation of companies, all the obligations of the publisher towards the author must be observed.
In the event of transfer of the publishing company in application of articles 81 and following of the aforementioned law n ° 85-98 of January 25, 1985, the purchaser is bound by the obligations of the transferor.
When the activity of the company has ceased for more than three months or when the judicial liquidation is pronounced, the author can request the termination of the contract.
The liquidator may not proceed with the sale of the copies made or their realization under the conditions provided for in articles 155 and 156 of the aforementioned law n ° 85-98 of January 25, 1985 until fifteen days after having informed the author of his intention. , by registered letter with request for acknowledgment of receipt.
The author has, on all or part of the copies, a right of pre-emption. In the absence of agreement, the repurchase price will be fixed by expert opinion.

The publisher may not transmit, free of charge or against payment, or by way of contribution to a company, the benefit of the publishing contract to third parties, regardless of his business assets, without having previously obtained the authorization of the author.
In the event of alienation of the business, if this is likely to seriously compromise the material or moral interests of the author, the latter is entitled to obtain compensation even by terminating the contract.
When the publishing business was operated as a company or depended on joint ownership, the allocation of the fund to one of the former partners or to one of the joint owners as a result of the liquidation or the partition shall not will, in any case, be considered as an assignment.

The publishing contract ends, regardless of the cases provided for by common law or by the preceding articles, when the publisher proceeds to the total destruction of the copies.
Termination takes place automatically when, on formal notice from the author giving him a suitable period, the publisher has not published the work or, in the event of exhaustion, its republication.
The edition is considered to be sold out if two requests for deliveries of copies addressed to the publisher are not satisfied within three months.
In the event of the author’s death, if the work is unfinished, the contract is terminated with regard to the unfinished part of the work, except by agreement between the publisher and the author’s beneficiaries.