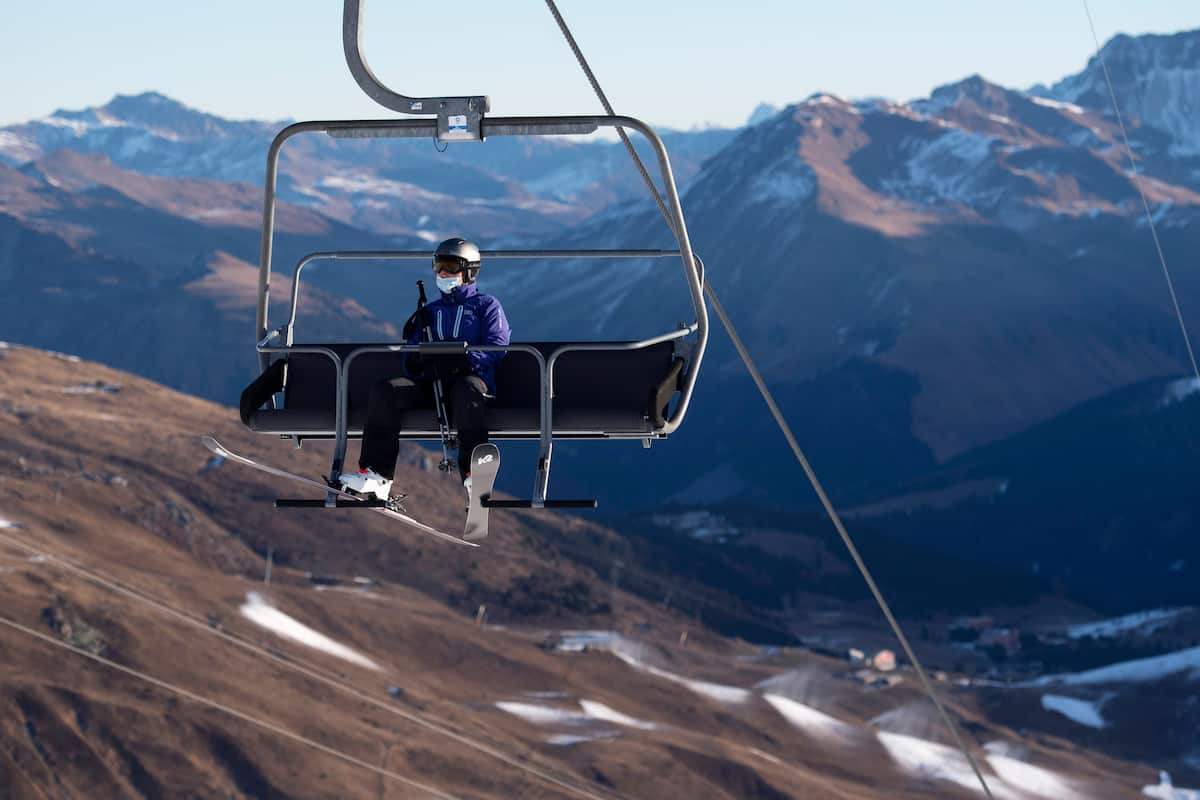 The term “ski lifts” are all devices for the public transport of people by funicular or cog railway, by cable car, by ski lifts or by any other device using carrying cables or tractors.

(Law n ° 2006-437 of April 14, 2006 art. 23 Official Journal of April 15, 2006)
The provisions of the first paragraph of Article 1, Articles 5 and 6, III of Article 7, Articles 9, 14, 16 and 17 of Law No. 82-1153 of December 30, 1982 are applicable to ski lifts. guidance for inland transport, the provisions of Title III of Law No. 2002-3 of 3 January 2002 relating to the safety of transport infrastructures and systems, technical investigations and underground storage of natural gas, hydrocarbons and chemicals, the prescriptions provided for in Articles L. 342-1 to L. 342-5 of this code as well as, where applicable, the provisions of Title I of Ordinance No. 2004-1198 of 12 November 2004 relating to various provisions of ‘adaptation to Community law in the field of cableway installations transporting people and relating to ski lifts in the mountains.

(Law n ° 2006-437 of April 14, 2006 art. 24 II Official Journal of April 15, 2006)
The ski lift service, if necessary extended to the installations necessary for the operation of the ski slopes, is organized by the municipalities on the territory of which they are located or by their groups or by the department to which they can entrust by agreement, in the limits of a defined geographical perimeter, the organization and the implementation of the service.
The municipalities or their groups can join, at their request, the department to organize this service.

The provisions relating to the control of ski lifts can be fixed according to legal, administrative and financial methods defined by decree of the Council of State.

The service is performed either directly, or by a public body in the form of an industrial and commercial public service, or by a company having signed a fixed-term agreement with the competent authority for this purpose.

The agreement is drawn up in accordance with the provisions of Articles L. 342-1 to L. 342-5 and sets the nature and conditions of operation and financing of the service. It defines the respective obligations of the parties as well as the conditions for assuming compensation for owners for the easements instituted under Articles L. 342-20 to L. 342-23. It may provide for the operator’s financial participation in investment and operating expenses caused directly or indirectly by the installation of the ski lift (s).

The ski lift services are subject to the provisions of the law of July 15, 1845, with the exception of article 4 of the said law, and to the provisions relating to the police, safety and operation of the railways. .

The rules relating to authorizations before carrying out work and putting ski lifts and ski area improvements into operation are set out in Articles L. 445-1 to L. 445-4 of the Town Planning Code.

I. – The design, construction and modification of ski lifts, the methods of their operation and the checks carried out in order to ensure that they are in good working order are subject to administrative and technical safety rules and to control officials from the ministry in charge of transport.
II. – For the construction and substantial modification of a ski lift, the client assigns a project management mission to a project manager who holds an approval issued according to criteria of recognized skills in the field of lifts. The mission entrusted to the project manager cannot include execution studies, nor the execution of the works.
III. – Checks of the operating condition of the installations and their maintenance are carried out by persons approved according to recognized competence criteria in the field of ski lifts.
The competent State authority may make the continued operation of a ski lift subject to the establishment of a diagnosis, compliance with restrictive operating measures, the addition of safety systems or replacement. of defective components.
IV. – When the rules laid down for operation are not respected or in the event of a safety risk, the competent authority of the State, after having heard the operator, gives him formal notice to take the necessary measures to ensure the securing the installation. At the end of the period fixed for the implementation of the safety requirements, the competent authority of the State may order the suspension of operation until the execution of these requirements.
In an emergency and in order to ensure the immediate safety of people, the operation may be stopped.
V. – The conditions of application of this article, in particular the conditions for issuing the approvals provided for in II and III, are set by decree of the Council of State.

(inserted by Law n ° 2006-437 of April 14, 2006 art. 16 I Official Journal of April 15, 2006)
The provisions of article L. 342-17 apply to conveyor belts providing transport for tourism or sports in mountain resorts. In addition, this equipment is subject, before being put into operation, to the authorization provided for in article L. 445-1 of the town planning code.
The conditions of application of this article are specified by a decree of the Council of State.

(Law n ° 2006-437 of April 14, 2006 art. 25 Official Journal of April 15, 2006)
The easement provided for in Articles L. 342-20 to L. 342-23 can only be established within the zones and sectors delimited in the local urban plans or in the land use plans in application. of 6 ° of article L. 123-1 of the town planning code. This provision does not apply to easements instituted in order to facilitate the practice of cross-country skiing or access to mountaineering sites, climbing in mountain areas and nature sports within the meaning of article 50- 1 of Law No. 84-610 of July 16, 1984 relating to the organization and promotion of physical and sporting activities as well as access to mountain refuges.

In municipalities classified as winter sports and mountaineering resorts and provided with a land use plan enforceable on January 10, 1985 or with a local urban planning plan, the provisions of Article L. 342 -18 apply from the approval of the modification or revision of this plan.

Private property or belonging to the private domain of a public authority may be encumbered, for the benefit of the municipality, the grouping of municipalities, the department or the mixed union concerned, with an easement intended to ensure the passage, the development and the equipment of ski slopes and Nordic sites intended to accommodate organized non-motorized snow recreation, overflight of land where ski lifts must be located, installation of line supports with a smaller footprint. at four square meters, the passage of the ascent tracks, the accesses necessary for the installation, the maintenance and the protection of the tracks and the installations of the ski lift, and,when the geographical situation requires it, access to the sites of mountaineering, climbing in mountain areas and nature sports within the meaning of article 50-1 of the aforementioned law n ° 84-610 of July 16, 1984 as well as access to mountain refuges.
An easement may be instituted to ensure, within the perimeter of a northern site, the passage, development and equipment of non-motorized leisure trails outside of snow-covered periods.

(Law n ° 2006-437 of April 14, 2006 art. 25 Official Journal of April 15, 2006)
The easement is created by reasoned decision of the competent administrative authority on a proposal from the deliberative body of the municipality, the grouping of municipalities, the department or the mixed syndicate concerned, after a plot investigation carried out as in the matter of expropriation. In the event of opposition from the municipal council of an interested municipality, it is created by decree in the Council of State. The easement file is kept available to the public for one month at the town hall of the municipality concerned.

(Law n ° 2005-157 of February 23, 2005 art. 179 b Official Journal of February 24, 2005)
The easement may not encumber land located less than twenty meters from buildings for residential or professional use erected or whose construction was authorized before the date of delimitation of the zones and sectors provided for in 6 ° of article L. 123- 1 of the Town Planning Code, nor the land adjoining residential houses and enclosed by walls on the date of this delimitation except:
– in the event that the construction of said buildings is subsequent to the actual existence of the track or equipment ;
– in the event that the actual existence of the track or equipment is prior to the entry into force of Law No. 2005-157 of February 23, 2005 relating to the development of rural areas;
– in the event that the establishment of the easement is the only means of ensuring the construction of the tracks, equipment or accesses referred to in article L. 342-20 of this code.
The beneficiary of the easement is subrogated to the owner of the land in the accomplishment of all the formalities necessary for the development of the tracks and equipment to which this one could be held in application of another legislation.

(Law n ° 2006-437 of April 14, 2006 art. 25 Official Journal of April 15, 2006)
The easement instituted by virtue of Articles L. 342-20 to L. 342-23 gives rise to the right to compensation if this results in direct, material and certain damage for the owner of the land or the operator. This compensation is payable by the beneficiary of the easement. The request for compensation must, under penalty of foreclosure, reach the municipality, the grouping of municipalities, the department or the mixed union beneficiary of the easement within one year from the date on which the damage was caused. or revealed.

The compensation is fixed, in the absence of an amicable agreement, by the expropriation judge, according to:
1 ° The consistency of the goods on the date of the decision establishing the easement according to the attacks made to their usual use and the modifications made to the previous inventory;
2 ° Their possible qualification as building land, within the meaning of article L. 13-15 of the code of expropriation for public utility, on the date of establishment of the easement or, when the easement has been established inside areas that can be developed for skiing or ski lift sectors delimited by a local urban plan or by an opposable land use plan, on the date of publication of the plan or, if these zones and sectors were delimited on the occasion of a revision or modification of the plan on the date on which this revision or modification was submitted to the public inquiry.

Improvements subsequent to the date defined in article L. 342-25 are presumed to be made with the aim of obtaining a higher compensation, unless proven otherwise. In order to ascertain the consistency of the goods on the date of the decision establishing the easement, an inventory, requested by the most diligent party, will be drawn up as soon as the easement is created.