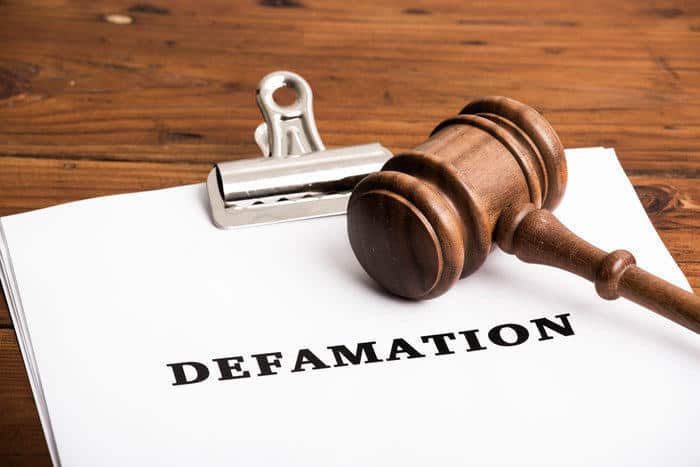 Any allegation or imputation of an act which harms the honor or the consideration of the person or body to which the act is imputed is defamation . The direct publication or by way of reproduction of this allegation or this attribution is punishable, even if it is made in doubtful form or if it targets a person or a body not expressly named, but whose identification is made possible by the terms speeches, cries, threats, written or printed matter, placards or posters incriminated.

Any outrageous expression, terms of contempt or invective which does not include the imputation of any fact is an insult.

Defamation committed by one of the means set out in article 23 against the courts, tribunals, armies of land, sea or air, constituted bodies and public administrations, will be punished by a fine of 45,000 euros.

Will be punished with the same penalty, defamation committed by the same means, because of their functions or their quality, towards one or more members of the ministry, one or more members of one or the other Chamber, an official public, a depositary or agent of public authority, a minister of one of the religions employed by the State, a citizen in charge of a service or a temporary or permanent public mandate, a juror or a witness, to reason for his testimony.

Defamation against the same persons concerning private life falls under Article 32 below.

Defamation committed against individuals by one of the means set out in article 23 will be punished with a fine of 12,000 euros.

Defamation committed by the same means against a person or a group of people because of their origin or their membership or their non-membership of an ethnic group, nation, race or religion will be punished by one year d ‘imprisonment and a fine of 45,000 euros or only one of these two penalties.

Defamation committed by the same means against a person or a group of people because of their sex, their sexual orientation or their handicap will be punished by the penalties provided for in the preceding paragraph.

In the event of conviction for one of the facts provided for in the two preceding paragraphs, the court may also order:

1 ° The display or dissemination of the decision pronounced under the conditions provided for by article 131-35 of the penal code.