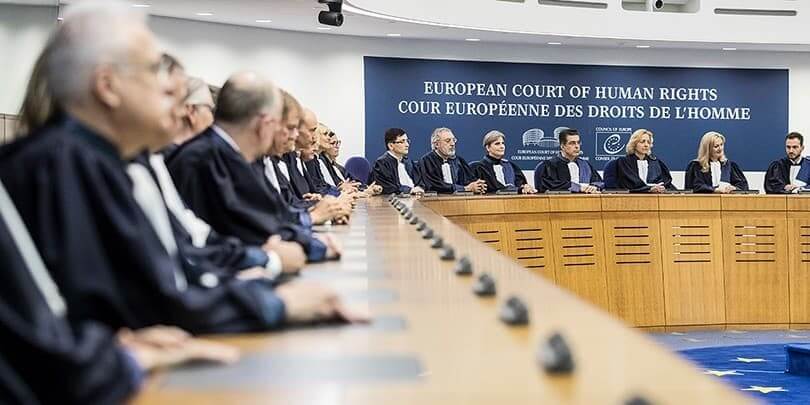 Article 19 – Establishment of the Court In order to ensure compliance with the commitments resulting for the High Contracting Parties from this Convention and its protocols, a European Court of Human Rights is hereby established. Man, hereinafter referred to as “the Court”. It works permanently.

Article 21 – Conditions of exercise of the functions 1. The judges must enjoy the highest moral consideration and meet the conditions required for the exercise of high judicial functions or be jurisconsults having a notorious competence. 2.
Judges sit on the Court in their individual capacity.
3. During their term of office, judges may not exercise any activity incompatible with the requirements of independence, impartiality or availability required by a full-time activity; any question raised under this paragraph shall be decided by the Court.

Article 23 – Term of office
1. Judges are elected for a term of six years. They are eligible for re-election. However, the terms of half of the judges appointed in the first election will end after three years.
2. The judges whose mandate will end at the end of the initial period of three years shall be chosen by drawing lots carried out by the Secretary General of the Council of Europe, immediately after their election.
3.In order to ensure, as far as possible, the renewal of the terms of office of half of the judges every three years, the Parliamentary Assembly may, before proceeding to any subsequent election, decide that one or more terms of office of the judges to be elected. to elect will have a term other than that of six years, without however exceeding nine years or being less than three years.
4. In the event that it is necessary to confer several mandates and where the Parliamentary Assembly applies the preceding paragraph, the distribution of mandates shall be effected by drawing lots by the Secretary General of the Council of Europe immediately. after the election.
5. The judge elected to replace a judge whose mandate does not is not expired completes the term of its predecessor.
6.The term of office of judges ends when they reach the age of 70.
7. Judges remain in office until they are replaced. However, they continue to hear cases that are already before them.

Article 24 – Dismissal A judge may only be removed from office if the other judges decide, by a two-thirds majority, that he has ceased to meet the required conditions.

Article 25 – Registry and legal officers The Court has a registry, the tasks and organization of which are determined by the rules of the Court. She is assisted by referendaries.

Article 28 – Declarations of inadmissibility by the committees
A committee may, by unanimous vote, declare inadmissible or strike out from the list an individual application brought under Article 34 where such a decision can be taken without further examination. The decision is final.

Article 30 – Relinquishment in favor of the Grand Chamber
If the case pending before a Chamber raises a serious question relating to the interpretation of the Convention or its protocols, or if the solution of a question may lead to a contradiction with a judgment delivered previously by the Court, the Chamber may, as long as it has not delivered its judgment, relinquish jurisdiction in favor of the Grand Chamber, unless one of the parties objects.

Article 34 – Individual requests
Table of Declarations relating to former Articles 25 and 46 of the ECHR
The Court may be seized of an application by any natural person, any non-governmental organization or any group of individuals claiming to be the victim of a violation by one of the High Contracting Parties of the rights recognized in the Convention or its protocols. The High Contracting Parties undertake not to hinder in any way the effective exercise of this right.

Article 35 – Conditions of admissibility 1. The Court may not be brought before the exhaustion of local remedies, as understood under generally recognized principles of international law, and within six months from of the date of the final internal decision. 2.
The Court shall not accept any individual application lodged in application of Article 34, when:
a. it is anonymous; or
b. it is essentially the same as an application previously considered by the Court or already submitted to another international body of investigation or settlement, and if it does not contain new facts.
3. The Court shall declare inadmissible any individual application lodged in application of Article 34, when it considers the application incompatible with the provisions of the Convention or its protocols, manifestly ill-founded or abusive.
4. The Court shall dismiss any application which it considers inadmissible by application of this article. It can do so at any stage of the procedure.

Article 36 – Third party intervention
1. In any case before a Chamber or the Grand Chamber, a High Contracting Party of which a national is an applicant shall have the right to submit written observations and to take part in hearings.
2. In the interest of the sound administration of justice, the President of the Court may invite any High Contracting Party which is not a party to the proceedings or any interested person other than the applicant to submit written observations or to take part in the hearings.

Article 37 – Removal from the register 1. At any time during the proceedings, the Court may decide to strike an application from the list when the circumstances allow it to be concluded: a. that the applicant no longer intends to maintain it; or
b. that the dispute has been resolved; or
c. that, for any other reason which the Court finds to exist, it is no longer justified to continue examining the application.
However, the Court continues to examine the application if respect for the human rights guaranteed by the Convention and its protocols so requires.
2. The Court may decide to restore an application to its it considers that circumstances the e justified.

Article 38 – Examination of the case and friendly settlement procedure 1. If the Court declares an application admissible, it:
at. continue the adversarial examination of the case with the representatives of the parties and, if necessary, carry out an investigation for the efficient conduct of which the States concerned will provide all necessary facilities;
b. places itself at the disposal of the interested parties with a view to reaching an amicable settlement of the case based on respect for human rights as recognized by the Convention and its protocols.
2. The procedure described in paragraph 1.b is confidential.

Article 41 – Just satisfaction If the Court declares that there has been a violation of the Convention or of its protocols, and if the internal law of the High Contracting Party permits only imperfect erasure of the consequences of such violation, the Court grant the injured party, where appropriate, just satisfaction.

Article 42 – Judgments of the Chambers Judgments of the Chambers become final in accordance with the provisions of Article 44, paragraph 2.
Within three months of the date of a Chamber’s judgment, any party to the case may, in exceptional cases, request that the case be referred to the Grand Chamber.
2. A panel of five judges of the Grand Chamber shall accept the request if the case raises a serious question relating to the interpretation or application of the Convention or its protocols, or a serious question of a general nature.
3. If the college accepts the request, the Grand Chamber decides on the case by means of a judgment.

Article 45 – Statement of reasons for judgments and decisions 1. Judgments, as well as decisions declaring applications admissible or inadmissible, shall give the reasons on which they are based. 2. If the judgment does not express in whole or in part the unanimous opinion of the judges, any judge has the right to attach thereto the statement of his separate opinion.
1. The High Contracting Parties undertake to comply with the final judgments of the Court in disputes to which they are parties.
2. The final judgment of the Court shall be transmitted to the Committee of Ministers which supervises its execution.

Article 48 – Advisory competence of the Court The Court shall decide whether the request for an advisory opinion submitted by the Committee of Ministers falls within its competence as defined by Article 47.

Article 49 – Statement of reasons for advisory opinions 1.
The Court’s opinion is reasoned.
2. If the opinion does not express all or part of the unanimous opinion of the judges, any judge has the right to attach to it the statement of his separate opinion.
3. The opinion of the Court shall be transmitted to the Committee of Ministers.